Time for an update!

The Time is nearing, October is probably one of my favorite months. We have the fair and thanksgiving and of course HALLOWE’EN! We have pretty much checked off everything on our list with the exception of finishing the candy supply.  We have come up with a few additions from the last post. I’ll mention them below.  Candy donations from Family members have been trickling in and piling up in the dinning room with close to 500 kids last year, donations are greatly appreciated.  If you’re reading this Thank you!

One of our bigger props this year and thanks to Amanda for this for a VERY early birthday present. She showed up to meet me for lunch one day and opened the trunk to her car with orange and black balloons inside, she had went and purchased the 6ft 6inch Werewolf from Home Depot. I had been eyeing this prop over the last few visits there. My youngest son helped me put it together that day when we got home. I was amazed with the quality of the product. It was all steel framed and very sturdy and actually took a power adapter rather than running on batteries. 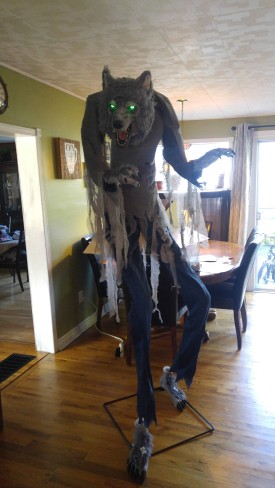 He is motion activated and moves back and forth, the jaw moves and eyes light up and snarls and howls at the end of his cycle. It’s very cool, he stands in my dining room at the moment next to my computer desk. I often look up at it and think what an awesome prop it is and I can’t wait for all the kids to see it.

LED lighting is underway. I think it’s complete other than the final wiring.  I had originally thought I would make close to 25 spotlights, but after some more thought about it I’ve cut the number down to 12.  Not everything needs to be illuminated. Specific props will be highlighted.   Here is a picture of the final spotlight project

It’s a PVC 1/2″ T the LED is soldered inside to some network cable, that comes out of a hole on the side. Which will run to the two power supplies on each side of the yard.  The idea is with the bottom and back piece I can just insert them into the ground and they will be aimed at the props.

I was sitting on the couch a few weekends back showing the girlfriend some projection videos and what could be done with a 3DFX prop.  Debating on ordering the form from the states, and in fear that if Amanda went to pick up another package and had to pay custom fees again, I’d be in serious trouble or the package would just remain at the post office. We decided to use a mannequin that we had picked up last year, Didn’t really know what to do with it last year other than just dress it up.  So, we placed it on the yard and draped a sheet over it and aimed the projector at it and created an animated ghost on the front lawn, we had wanted to test it out to make sure the massive spot lights I have didn’t flood the effect out.  There is a still from the video below.

There are a few images that will be projected on to the form, I have to still build a box that will look like a tombstone to hide the projector from plain sight. (I’d also like to note if it rains on Halloween, I’ll be PISSED!)

Should have all the tombstone carved out this weekend, and each kid has made their own, so we’ll place them all in the backyard and get them painted and into the basement for deployment in a few weeks.   We usually start setting up after Thanksgiving.  I’m sure they’ll be more updates and pictures as things progress.  There’s also a new Hauntcast episode coming out at the end of the month, So I’m pretty excited for that.

Crunch time is here, So much to build so little time, I may be spending a few evenings in my workshop with the last few projects on the wraps.  Sorry in advanced Arn Arns!  I lucked out this past weekend when grabbing some more 2″ Foam board they ended up putting an extra piece in the back of the Truck…. Ever see that Ikea commercial… START THE CAR!!!! So I’ll be adding another 6 new tombstones on top of the 3 I’ve already made.  The kids have been wanting to make their own, so 1 of 5 have come up with an idea so far. Yesterday I’ve received my LED lights from Lighthouse LEDs.  I ordered about 40 leds and a few power supplies.  The idea is to aim these at the tombstones to make them pop. I use a few massive blue flood lights and they wash everything out.  So this should look really cool. Atmosphere is everything!  Last year for a few props I had used a dollar store flashlight zip-tied to a tent peg.  It did the trick but ready for the next level.  The idea is to solder the LEDs to some network cable I have kicking around the house since they’re such low voltage. I’ll be gluing them into a 1/2″ PVC T pipe one end for the LEDs one end for the wire and the bottom piece to stake into the ground. I’ll be posting pictures as it comes along.   Yay Haunt Season!

Last night I was walking to the store and thought I’d take a quick snapshot of my lights on the graveyard. I started off with one because they were $20 a light bulb and wasn’t sure how much I would like it or how much of a difference they would make.  I tried hard at the till to use $5 off energy saving coupons, but for some reason they didn’t apply which made no sense to me since these are 14w compared to 100w a conversation I had with the cashier that got me nowhere.

The picture isn’t the greatest quality, Phone camera…. Hoping to get some better ones this weekend when more of the props make their way to the front lawn. The old lights bulbs looked white with a hint of blue and barely lit up half the yard, these two light up the entire yard and the side of my neighbor’s house, which I need to go over and speak to them about to see if I need to reposition things.  I could see this light from over a block away from the highway.  It’ll look great when the projections are going in the windows too.  Won’t be long now!  Stay tuned for my photos this weekend.

I also constructed my last tombstone of the season.  It’s up there with one of my favorite I’ve only made foam tombstones this year, I started with a few last year and all the previous ones before that were wood.  I’m glad I made the switch to foam and will likely phase out the wooden ones in time. I drilled 3/4″ holes in the bottom of the tombstones and banged PVC pipes into the ground then slid the tombstones over the top.  We had pretty strong wind yesterday and they stayed in place.  Also reconstructing the end of the fences with larger PVC pipes have kept them standing straight, usually after a week they start to lean back a bit due to wind and rain.  Typical October weather.